MMA: A Chance Meeting and an Old Friend

So today I went to a nice big park I've never been to before. It was a lovely day and there were many people out with their children and dogs enjoying the weather. I wandered around, walking with particular interest near the dogs playing. (I'll try to get some photos next time!)

Through the cover of some trees I saw a large white dog running around. Looks kind of like acd6pack's Breeze, I thought. Emerging, I spotted a woman with her laptop computer seated at a park bench. Every five minutes she'd look up from the screen, use her plastic stick to throw a tennis ball out away from the bench, and her dog would run after it, bring it back and wait next to her, sometimes depositing the ball onto the bench alongside her. Her dog would wait for her to throw it again, and every few minutes she would do so, looking up from the computer screen. I was amazed at her multi-tasking. I approached, enjoying the spectacle.

She looked up. Your dog is very patient, I said.
He is, she agreed. I've been here for hours.
She told me what a great dog he was. He loved to play fetch, and play in mud to cool down to prevent overheating. He was probably an American Bulldog x English Staffordshire terrier, or was it English Bulldog x American Staffordshire Terrier? He was deaf. She had had him for four years.
She met him through volunteering at an animal shelter and fell in love. She meant to take him home just for a weekend but, as you can imagine, he never returned to the shelter.
I told the woman I love dogs and had thought about volunteering at a shelter. She encouraged me to do it, going so far as to find a nearby dog rescue for me on her laptop.
She told me about having to wave frantically to get her dog's attention when he ran over to strangers, which made me think of the acd6pack's Azule, who is also deaf. I mentioned the blog, and as she seemed quite interested I eventually pulled it up for her on her laptop.
She sat stunned when she saw the photos. I suddenly realised why.
She pointed open-mouthed at Breeze. That is incredible! she said. That is just amazing! The likeness is really uncanny.
So I was right, I thought. I had initially thought it was just my unfamiliarity with dogs which made a lot of them seem similar to me. After all, I doubt in a lot of instances I could tell between examples of the same breed. But nope, she was surprised to find a lookalike for her beloved dog.

I had been throwing the ball for Kudos, the dog, and chatting to him as I did it. I had been talking to him for a little while before I remembered that he couldn't hear me. But it was just instinct; I couldn't stay silent while interacting with another being.
Kudos was a dog who drooled a lot, and his tennis ball (and my jeans) soon resembled a soggy mess. He is disgusting, the woman kept repeating with affection.
She told me about using hand signals to communicate with him. Like pointing to herself, then to her heart, then to him. I was surprised that she communicated abstract emotions like love as readily as concrete concepts like sit.

I patted Kudos on the head each time he returned to me. I still feel a disconnection when I look into a dog's eyes - with humans, there is a sense of recognition when you make eye contact. I always feel like I am staring into blankness when I look at a dog. I wonder if that will change over time. (After all, I can't ever remember feeling that way about a guinea pig.)
The woman was very friendly, and we chatted for a while longer.
It was time for me to go, so we promised to keep in touch and I left.

Since I'm on a sabbatical at the moment, I've been thinking it would be a good idea to pursue some volunteering at a shelter or rescue. I had been leaning towards helping with guinea pigs, but since I want to know where my interest in dogs might lead me, that might be a good opportunity also.

My other achievement of the day was to bring this guy some pig trotter chews: 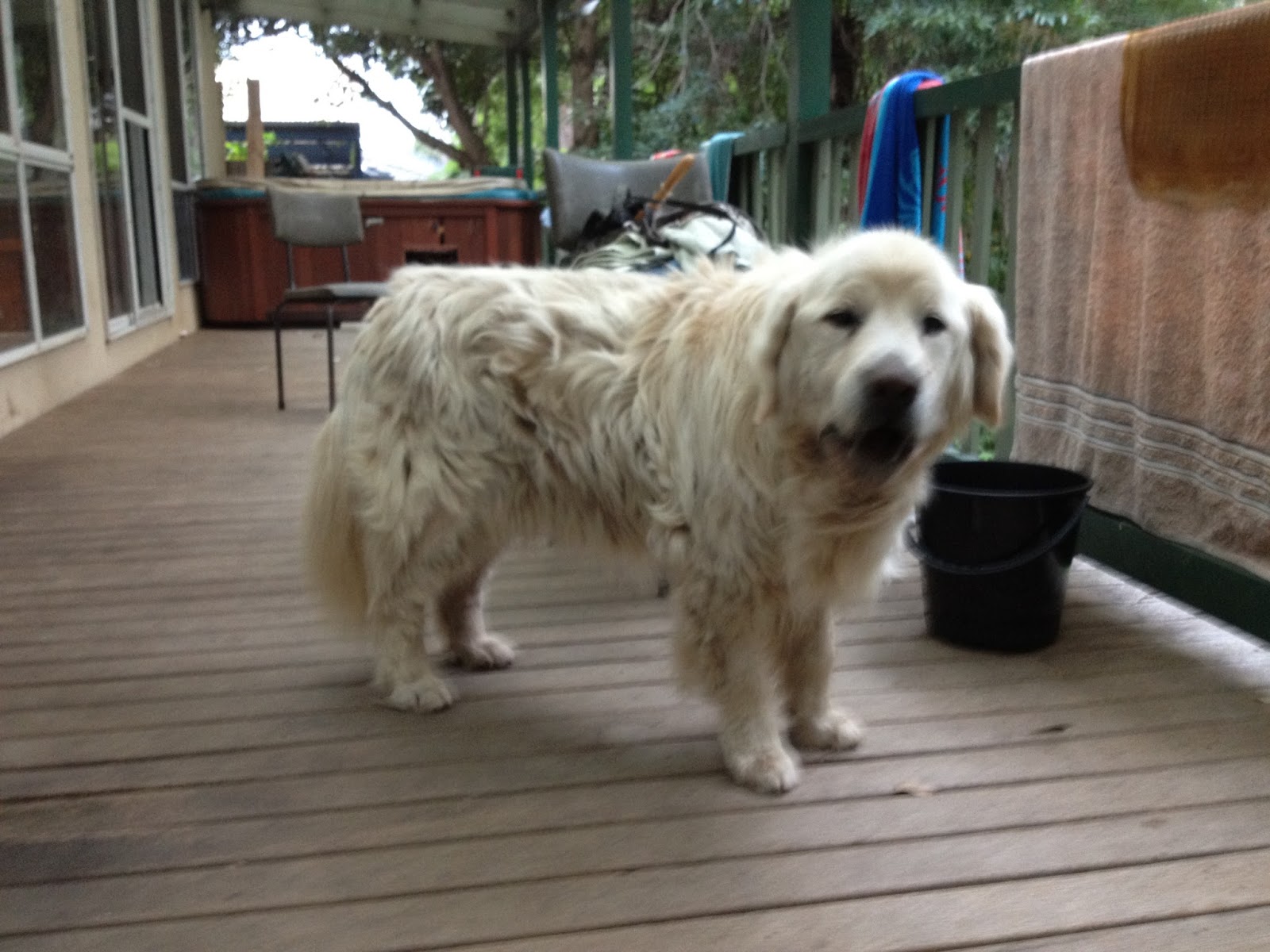 Jackson! The old dog (he's 13) who lives at the house of a friend of mine but does not get much attention. (My friend is not the owner of the dog - he belongs to one of her housemates.) I try to do what I can to brighten up his life. (My friend does too, what little she can do under the circumstances.) As I shopped for snacks to bring to our girls' movie night, I picked up a bag of treats.

It was only after we were done with movies that the dog appeared on the porch. (I had called for him, with no response, but I was told he was mostly deaf now.) What I should have done is go out to the dog by myself first, sans treats. See, Jackson's previous experience with me involves lots of treats (there weren’t any dog biscuits left or much in the fridge or I used cheese) and a subsequent bath. So I can understand if he'd be a little confused about me – cheese lady! I like this one! Wait, why am I all wet? Last time, because I know he's been at least somewhat trained, I insisted he sit before I give him treats. So I wanted to know if he would remember me this time.

He certainly followed me and of his own accord sat over and over again for me, but whether it was because he could smell the trotter in my back pocket or he remembered that I am a giver-of-treats I couldn't tell.

The next morning I checked and couldn't see any sign of the trotter, so I assume it was either eaten or stashed away or buried somewhere.

I did, however, find a Jackson doughnut: 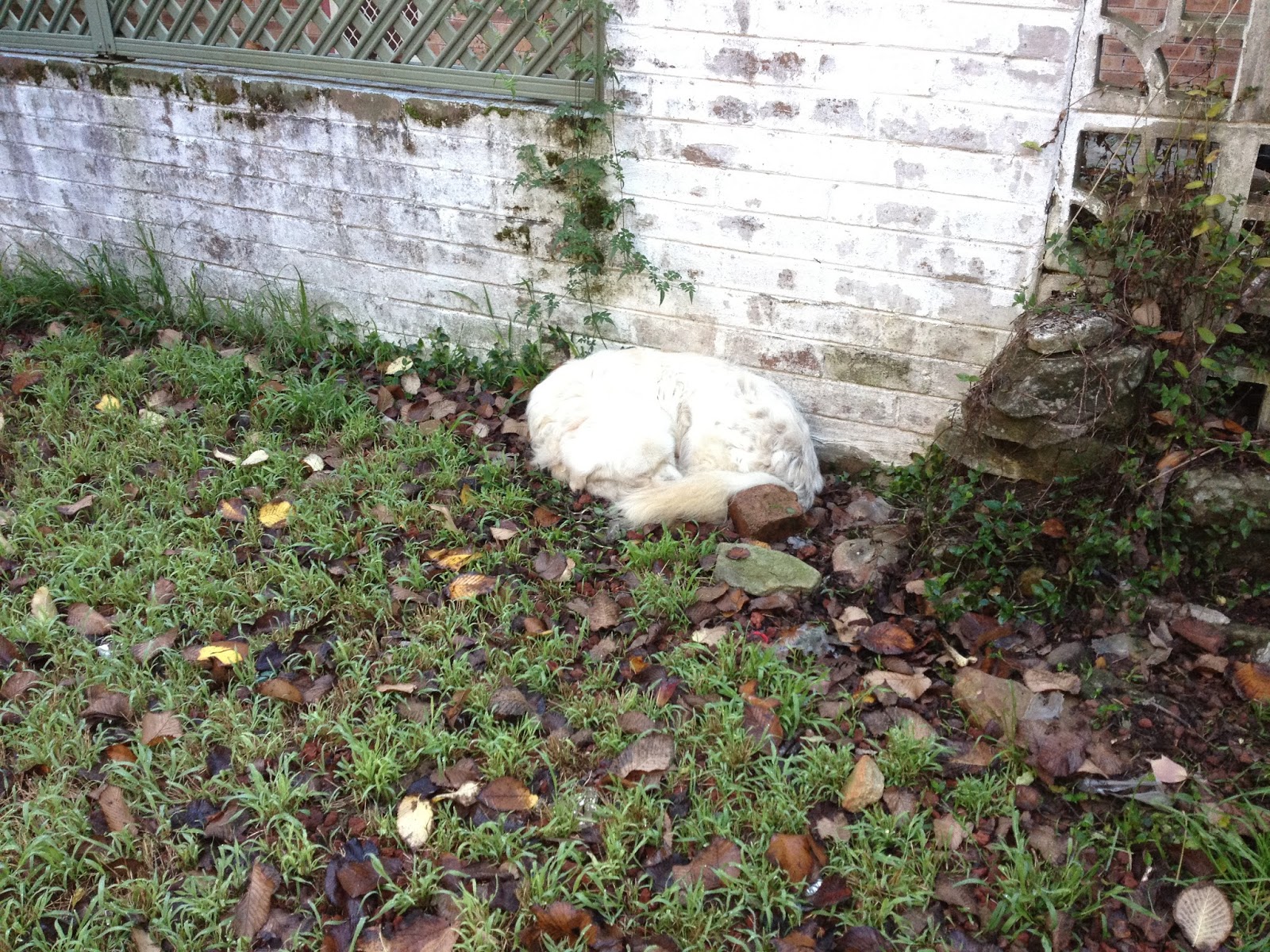 I think I'm really growing to love this guy.
Melon