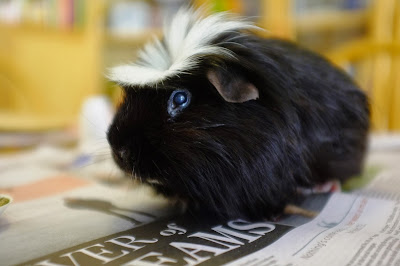 Wheek, Cocoa here. Just wanted to let my admiring fans and followers know that I am doing okay. I would've been here earlier, but the hooman wasn't doing so good - something about being "in a funk", whatever that means. She hasn't been able to take care of me as she'd like to, but between what she can do and what the Mommy hooman (not Melon, the one they call Mommy) has done, I have to admit I have been taken care of. Melon's been feeding me with that stick once a day - yuk! She says it's a little extra because she wants my weight "back up to normal". Pleh. Guess I'm stuck eating that funny stuff for a while, then. Still, I finally got... my par-sley! I was promised it days ago and finally, today they have made good on that promise. 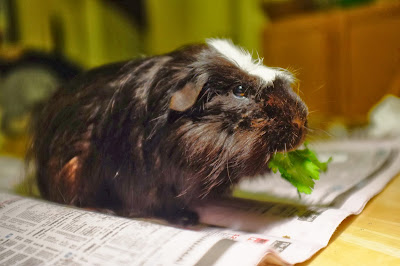 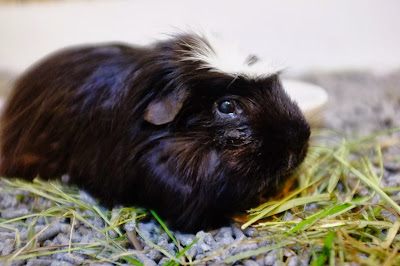 Wheek, Cocoa here. I'm home again after another time in that weird place. Just like last time I don't feel like moving much, but Melon's been bringing my foodables right to me so I'm happy to munch them. She gave me this wedge of wet orange thing yesterday and told me to eat it - something about "vitamin C" but it smelled funny so I didn't even try it. Today she says she's going to bring me back some par-sley. Success! Hoomans are so trainable if you know how.

Thanks everybody for thinking of me.
Cocoa
Posted by Melon at 15:28 4 comments: 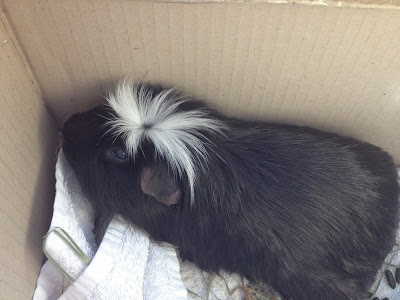 Cocoa is going in for surgery today to remove the tumour which has regrown. He is still brighteyed and happy so we're giving him another go at surgery.
Please keep your paws crossed for complete removal of the cancer this time!
Melon
Posted by Melon at 09:54 4 comments:

Hey, it's Melon here again.
I just found another lump on Cocoa right where the tumour was. It looks just like the last tumour, although smaller. You know when they say your heart sinks? Mine just did.

Of course I automatically start thinking that I should have checked him earlier (I meant to check him every week but it's been 3 weeks since he was last checked, by the vet) and wish I spent more time with him. I was feeling good today after walking my friend's dog in the rain, but it's hard to come home to find I haven't been as vigilant with my own boy. 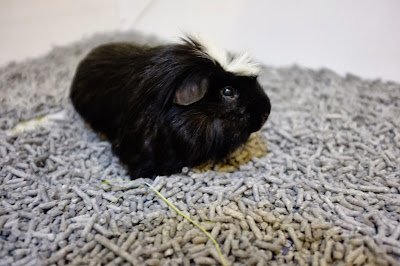 I'll try to take him in to the vet tomorrow. He'll need to have his back legs checked out too 'cause he's been dragging them a bit since the day before yesterday.

So I hadn't walked Katie the Lab for over a week and I've missed it - I'm finding walking her quite therapeutic, which is great since I struggle with anxiety.

The walk was very eventful, making me realise I really had missed a lot.

First, there was this: 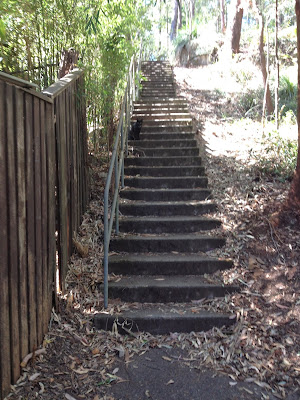 Do you see the hazard in that photo? Yup, the black cat sitting calmly on the stairs. (Hi Xeti, is that you?) Luckily, Katie, who is reactive to dogs and cats, passed calmly and without incident. So I guess it's not all dogs and cats she is aggressive to, just some.

The next thing was that I managed to get Katie to Leave it and Come away from two potential foodables she'd picked up in her mouth. I was feeling really good about that! And there's more...

As I entered a park we normally walk through, a little dog suddenly appeared, running straight for us. Uh-oh! I thought. Katie does not like small dogs. It was a pug x French bulldog and it ran at us, daring us to pass, and continued circling and following us when we tried to leave. It stuck its nose into Katie's behind as we tried to leave the park, and as we left I realised it was still with us and had no apparent intention of leaving. I walked Katie, small dog in tow, back to the playground slide where two people were dozing with sunnies over their eyes. Who in the world dozes while their dog is harassing other people? Excuse me, excuse me! Is this your dog? Heads were shaken. Oh. Then where in the world had this doggy come from? Katie was so good, she did a Sit for me while the dog was still harassing her. I rewarded Katie and sat down to try to check the tag on the pug's pink collar. It jumped right into my lap, clearly being used to attention. As I reached for the tag a blond guy in shorts appeared to collect the dog. Apparently the pug'd escaped from his garage. So that's a non-reactive Katie and a loose dog back home, so this story has a happy ending. (I wish I had a photo from the incident, but as you can imagine, I didn't get a chance to snap any!)

And THEN Katie decided that she doesn't want anyone to think she's a well-behaved dog, so she found two bones/skulls on the walk and with the second one, completely abandoned the walk to lie down under a tree and enjoy it! 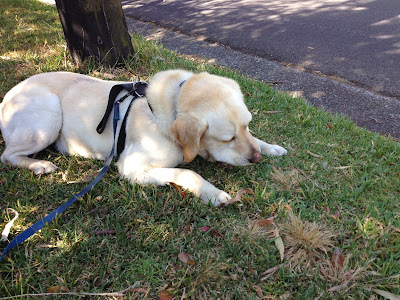 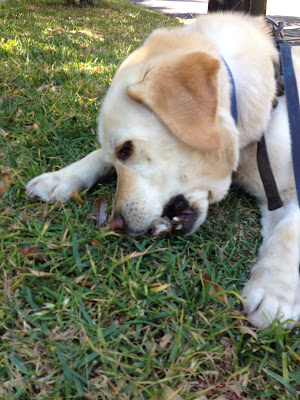 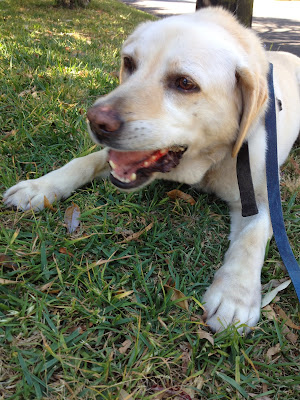 But look how happy she looks afterward, so what can I say?

Hey, Melon the hooman here. Just thought I'd share...
So every day Cocoa gets a tub of grass nearly as big as he is. 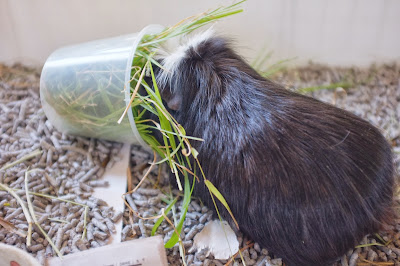