I woke up on the morning of Training Day 1 without a clue what I was going to do, or how we were going to start. I considered putting it off until I'd done a bit more reading. But no, I wasn't going to set us back on the first day, not to mention Gatsby needed to get used to me being around as much as possible.

Luckily, taking public transport gives me plenty of time to prepare. Clicker in my bag - check. Messaged K and discovered that she didn't have any high-value treats, just "the current treats we usually give her". Stopped by the supermarket and picked up a package of ham bits. Now we're talking! Ready for lesson one: charge the clicker.

My friend and I took a little time off first, so I used the opportunity over coffee and cake to voice something that had been on my mind. I told K that I would love to take her dog, I thought it would be really rewarding for all of us, but I had two conditions:
Luckily for me, K agreed with the former - in fact, she had been operating on the assumption that that was the case. There was no way I was expected to take her dog if I wasn't comfortable with it. With that cleared up, I only had one more thing to ask: how on earth am I going to get Gatsby's attention? I had briefly tried charging the clicker at my house, but Gatsby, as usual, only had eyes and nose for K. Then, we realised - some dogs are distracted by sights, sounds or smells. We were working at her house because Gatsby was most comfortable there. So in a place she's comfortable with, we have to remove the ultimate distraction for Gatsby - K herself. So since I'm the one working with her dog for an hour, why doesn't she go to the gym? And I think that suggestion resolved my second condition - Gatsby's human was willing to do what she could to help with The GG Project, including offer suggestions or make herself scarce. So with that cleared up, we were ready to roll!

I took Gatsby to the paved area behind the house, pulling the blinds down over the glass door so she couldn't see back into the house.


Because K's house is rather open-plan I felt I had less control over the space and distractions inside the house compared to the smaller, fenced paved area out the back. It also meant that with us outside, K was free to leave out the front door without her shadow noticing. (I'll be honest, I'm still amazed this worked!)

I spent some time walking around, clicking the clicker and offering her ham bits. It was very different from the last dog I trained - a Lab, who once she knew I had treats would have done anything to get to my hand or pocket. Gatsby was surprisingly casual about it - she would eat the offered bacon but wasn't glued to my side, wandering around in her own little world, but accepting the treats when I offered them to her when she paid any attention to me. 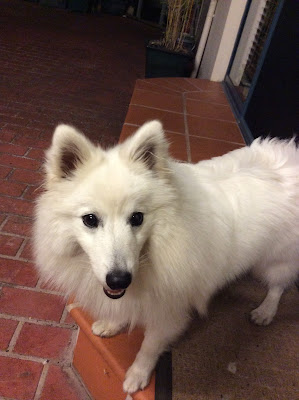 After about 10-15 minutes, I went inside for 10 minutes, then returned and repeated the exercise. This time, somehow, the family cat made it outside as well, and stayed nearby once he knew we had ham. Oh! Now I happen to know this cat loves ham, so I had to give him a piece too. Unfortunately, Gatsby eats quicker than the cat does, and was reaching for every piece the cat got too. Uh-oh, not what I intended. Suddenly, I spotted the cat's empty bowl and dropped a few pieces of ham in. About to place it on the floor, I realised the flaw in that plan, and placed it up onto the desk. Kitty jumped after it onto the desk, and Gatsby turned back to me - perfect. I felt so proud of myself - I had discovered management, vital for a pet owner, as well as how nice it was to have a short dog. 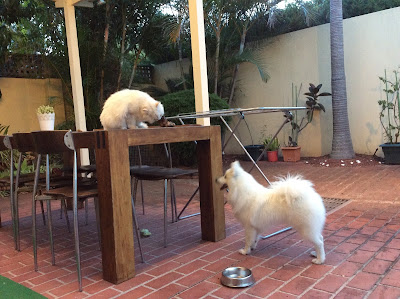 I wasn't sure if Gatsby was noting the clicker, and then remembered something I'd read, that the treat had to be after the click, not during, to ensure the dog knows the click predicts the treat. So then I made sure there was a definite pause between clicking and treating. (It had gotten too easy to do both at once, as long-time readers will be glad to hear after my first experience involving a clicker, a Lab, ham bits and much clumsiness.)

By the time the hour (including breaks) was up, it was starting to get dark, so I was happy to retreat inside again. Putting the clicker and treats on the table, I pulled out my computer to do some work as I waited for K to return. After a while I noticed that even though I was ignoring her, Gatsby was waiting by my side quietly, either sitting or lying down. Wow! I ignored her so she would completely lose focus on me, and she retreated to the couch, but lay there calmly until she heard K's car pull into the driveway. She jumped up and headed for the door. Why not? I thought, and clicked.

Gatsby immediately turned around and headed to me at the desk. Wow! Treats for sure.
I honestly hadn't known at that point if the clicker was 'charged', but that certainly provided the answer.

Well?! How did she do?? K asked me as she came in, Gatsby leaping around her heels.
I smiled. You'll see, I said. Just ignore her.
We ignored her and chatted for a bit, long enough that Gatsby lay on her back on the floor, in her own world.
K noticed the clicker on the table and picked it up. What happens if I click it? she asked.
Yeah, go ahead, I said, hiding a grin.
What will happen? 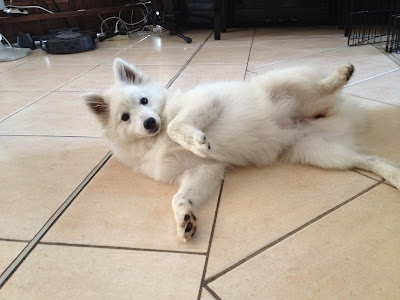 Gatsby, on the floor, pretty much jumped to attention. She knew what the sound meant.
K was delighted to offer her a treat. So you can learn things, K said, rubbing her fur. And here I'd practically given up, she said, but she was smiling.

I was very pleased too. It's time to admit that if this first day hadn't gone well at all, I think I might have been very discouraged and thought about giving up. I've been more daunted by this task than I'll let on - and than K knows, I think - so I think I'm filled with one part happiness but two parts relief. The success of Day 1 - goal achieved: clicker charged - has been a real encouragement, so the project must go on!
Posted by Melon at 00:54