Training Day 2: In Which What Goes Up Always Comes Down

Did you bring the clicker? Did you bring the clicker? K asked as I arrived for our second day of training.
Yes, I brought the clicker. She hadn't let me leave it with her last time because while I had explained the theory behind it and how it is used, everyone in her family were prone to fiddling and she knew anyone who walked past the table (including herself, apparently) would start clicking it indescriminately.
I took it home.

Fortunately, Gatsby was still aware of what the clicker meant... 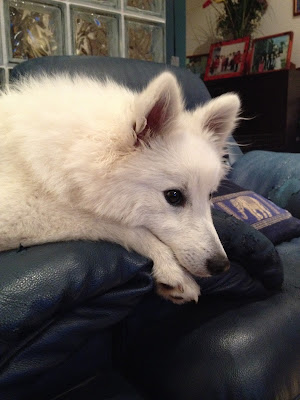 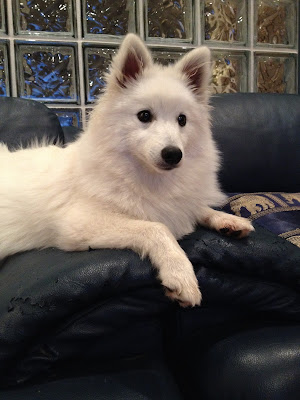 With that, I took her out back again. Since she responded to the clicker, I was hoping to teach her to respond to her name - to look at me when she heard it. This was actually surprisingly difficult. I've noticed K loves to chant her name in a cutesy voice while she plays with her 'Gechhbi, Gechhbi', so I wondered if she was desensitised to her name. I tried adding 'hey!' as a 'look at me', but with no avail. I just sounded silly saying 'hey!' in an excited voice over and over.
Hmm. Maybe forget that step and go straight to my first goal: recall. Maybe once she knows good things come from me she'll pay more attention to me.
This didn't go so well either. K came out and found me struggling, and as I pointed out Gatsby didn't seem so keen on the ham bits this time either, we crushed up some lamb... something or other. I forget what they are exactly, but they come in big dry crunchy pieces in a package from Petbarn. That got her interest for a bit longer, although they can be hard to break into small enough pieces.

K and I called her back and forth across the very small area, treating her when she came to us. She did start coming to us fairly reliably, but -
Do you think she's just playing us for treats? I asked K. Running back and forth?
Probably, K replied.
I stopped calling. Sure enough, she'd look over after taking K's treat, knowing it was the other person's turn to treat. Hmm.

I'll play with her, K said, grabbing a rope toy. K was worried Gatsby would get too worked up with the toy (she's possessive), which is why K doesn't usually use toys to play with her, but I thought it was a good opportunity to test the recall. Nope, she wouldn't come to me when the toy was involved.

Well, I had somewhere to be after that so I couldn't stick around any longer, but wanting to end on a good note I opened the door, went inside and called Gatsby in after me. No matter what I did, no matter how excited I sounded or how many treats I waved, Gatsby wouldn't come in.
I looked at K.
We only call her in when we're finished outside, she said.
Oh man.
Feeling discouraged, I shut the door, leaving Gatsby in the yard, and asked K to drive me to the station. As I was gathering my things Gatsby started pawing at the closed door and K automatically opened it for her.
Do you realise what you just did?
K looked at me... oh, right! Whoops. I honestly didn't realise, it's habit now.
Sigh.

I was frustrated at myself for not being sterner with my friend, because at the beginning of a session I'm always pumped and sure we'll make progress, and then at the end when I'm exhausted I'm frustrated at her for not being more disciplined and frustrated at myself for not being more assertive and clearer with my message. Fortunately I did my best to voice my opinions to K before I got out of the car, and I think she is, slowly, realising and taking it on board. I made a mental note to send her a clear email before I saw her again, and reminded myself to be thankful that she was getting involved - when she sat down on the stoop to join in with recalls it was a clear sign she knew we were in this together, she wasn't leaving me out the back to work with her dog. Not every day will be a success, I know. But we'll rest up and be at it again the next day.
Posted by Melon at 01:10