Once upon a time there was a human named Melon. One day she found Blogville, where people blogged about their animals - mainly dogs, but other anipals too - and enjoyed it so much she wanted to join in. But she wasn't sure what to blog about. That's when her quiet but punk guinea pig Cocoa took over, and aired his views on food, and, uh, food, and baths, and... that's about it. But Cocoa had his day and it's back to me again.

So, welcome to Melon's Animal Adventures. Welcome back for those of you who have been a part of this before, and I hope to make new friends here as well as in my adventures in the outside world. Most of all, I hope my stories are as interesting as Cocoa's!

So first up, introducing...

My best friend has a Japanese Spitz named Gatsby. First up I should mention that she's a girl. Gatsby, I mean. I'll forgive you the first three times you forget; I did a lot at first. After that though, I'll have to give you a time-out. One minute for every month of your age... 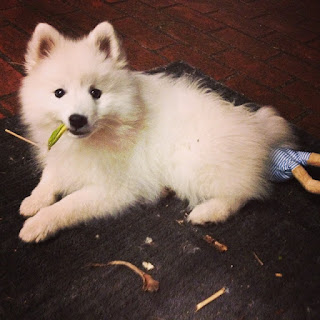 Gatsby just turned one year old and my friend K has had her since she left the breeder at 8 weeks. Unfortunately K and I were both very busy when she got her, so I didn't get to meet Gatsby until she was about 6 months old. Gatsby's puppy photos were adorable, though, and she's pretty stunning now. 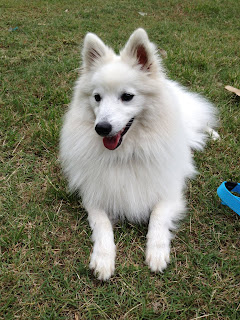 But you know what? She annoys the heck out of me sometimes. Or maybe it's K who annoys the heck out of me sometimes, because she seems to have spoilt Gatsby rotten. K's a knowledgable and responsible pet owner, so Gatsby is well-fed, well-groomed and exercised, but Gatsby's also overly attached to her person, afraid of other dogs and children, and possessive of a bunch of things. Which kind of drives me crazy, like when we're in public; K heads to the counter to buy a coffee and suddenly Gatsby whines and barks so loudly that I have to explain to the wide-eyed bystanders that I'm really not into torturing dogs, honest.

Now, K is going on a two week trip next month, and guess who's taking Gatsby? Her mother. I'm kidding! K says I'm the only person she'll trust with her, and it's true that since I've been blogging with Coke I've not only read everything I can get my hands on about dogs, I've been unble to tear my eyes away from every dog in my vicinity, no matter where I am, from the minute they walk into eyeline until they're out of sight. And as long-time followers know, I got involved in improving the lives of a few also. Gatsby also knows me and they both know that I won't let her get away with anything, although it doesn't stop the four-legged one from trying. (Okay, the two-legged one too, sometimes.)

So what's so good about all of this? Well, first, I should have a lot of fun with Gatsby while she's staying with me. She's awfully cute, and not only will I enjoy all the compliments and chats with total strangers with her on the other end of the lead, I'll get to live vicariously as a dog owner for a while. It's not time for a woofie of my own yet, so this one will do in the meantime. 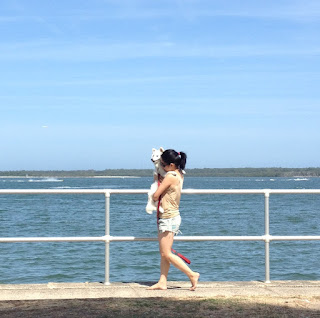 Secondly, I've had to be a tough-love friend and tell K that her dog is kind of a spoilt brat, and that since I know it's important to K too to have a good canine citizen, she as an owner needs to shape up, for everyone's sanity. The good part is that, so far, I think she agrees and is totally on board with my plan...

The Great Gatsby Project: to spend the next six weeks ensuring those two weeks in August will be enjoyable, not torture, for the four- and two- legged alike. Sometimes I despair, and time will tell, but I think we can do this. K, Gatsby and I.
Posted by Melon at 15:17