The Trial Run: Who Tells It Like It Is, Melon or Gatsby?

Very observant readers will be able to guess why I’ve been too busy to post this week, but before we get into that chapter of the story I should tell you first about Gatsby’s Trial Run!

I’ll cut to the chase: It went really, really, well. Better, in fact, that any of us – K and I for sure – could ever have dreamed. (The lovely Kirsten of peacefuldog can testify that I was expecting absolute drama, and has a desperate email plea for advice to prove it!)

Gatsby stayed calm. Because of this, we humans could relax and enjoy the experience.


I admit I kind of still can't believe Gatsby spent a whole 24 hours away from home without any meltdowns from either four- or two- leggers, but upon reflection I can credit its success to 2 factors:

Now, which things are we talking about? Well, let's do an analysis.

My explanation: I took her out walking and playing for a good 3 hours as soon as she arrived before I deemed it safe to return home.

My explanation: I treated her like a puppy and took her out after every meal, as soon as we got up, right before bed, etc.

Gatsby’s explanation: Doing business in the house like an uncivilised human? Gross!

(K: And my house, where you live, and pee on the floor all the time, is what – the street?)

My explanation: I did some thorough de-cluttering to our totally un-dog-proof house to keep everything destroyable out of reach.

Gatsby’s explanation: Destroy things? But I like it here.


My explanation: I bought second-hand baby gates and installed them to block off the kitchen and two carpeted areas.

Gatsby: Ha. I didn’t even try to walk through them! After all… why would I move away from my water, bed, and most of all... my people? ♥ 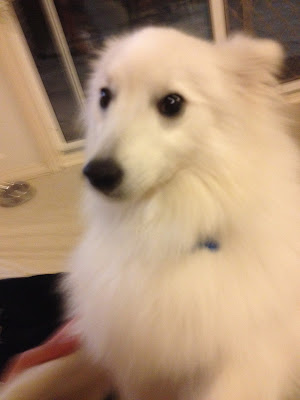