Training Day 5: In Which All Is Quiet, If Somewhat Confusing, on the Home Front

It was raining outside again. While I didn't mind that Gatsby resembled a swamp monster when she emerged from mud puddles, I figured it was probably easier not to mind if you didn't live within smelling distance, and so refrained from taking her to the park, despite how fulfilling it had been last time.

Ah, well. I was sure there'd be some human-canine bonding activity we could do in the house. K had gone out to an appointment, so I settled down to do some work in the study.

I couldn't concentrate, though, because there was some rattling and howling going on just across the hallway. 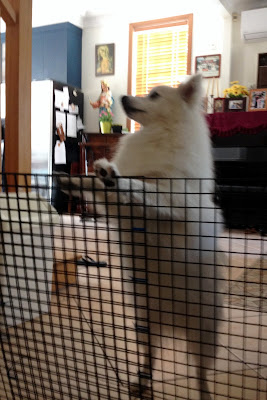 I sat down cross-legged on the other side of the gate, and clicked and treated Gatsby when she finally quietened down and stopped rattling the gate. She bounced up again, rattled the gate, and since there was no response, put four back on the floor. Click. 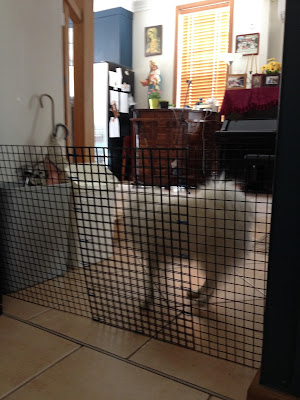 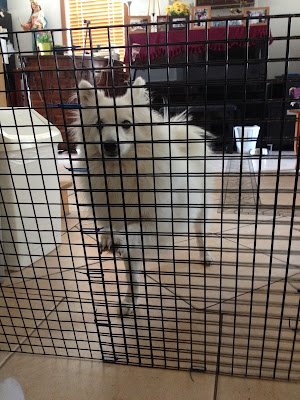 Soon I was rewarding her for Downs through the gate. 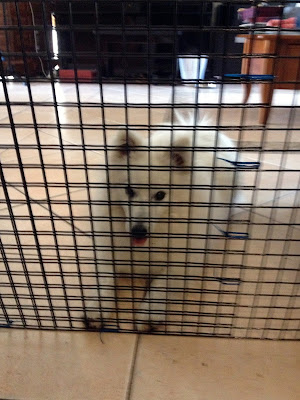 After a while I always wonder if she's getting it or not. Is she back-chaining already (purposely jumping up and back down to 'earn' a treat)? Does she have any idea I'm telling her something at all? I have no idea, so I take a break.

I go in and out for a bit, having lunch, returning to the desk, but later, working in the study with K's brother, I see Gatsby lying quietly by the gate. Not in a Down, just lounging there quietly. Looks good to me.

Does she usually stay there quietly? I asked K's brother.
He replied that she did, but when K got home later and joined us in the study she commented on Gatsby's calm behaviour.

She never just hangs out there quietly, K said.
Really? Your brother said she did.
Well, never when I'm in here, anyway, she clarified.

It sure is hard to make sense of humans too, sometimes.

Anyway, I'm sure I'll have a lot more to report when I can work with her consistently on her 'holiday' -- which is coming up sooner I'd expected!
Posted by Melon at 16:44