An Incident: In Which We All F*** Up, Sometimes

We are nearing the end of the Gatsby saga, but there's one incident that happened during her stay that I want to share with you all. Because I'd like to know what you guys think, and because the truth is -- we all f*** up sometimes.

About two-thirds into Gatsby's stay, I decided I was fed up with being scratched. I knew it was mainly due to how long her nails were, so I started looking for a groomer. I had no desire to try doing them myself because she's a nightmare to clip. In the past, we've resorted to both K and I working together and Gatsby ingesting a large amount of pawpaw ointment to get a few nails clipped. When I asked K she told me Gatsby could now be clipped by a groomer.


I have to admit -- part of my impatience to have her nails clipped was because I had company that evening and didn't want her scratching my guests in excitement.


I was hesitating because I didn't know if it would work; Gatsby is afraid of so many things. I didn't have a car to take her, either. While sitting on the issue, I woke up one morning to see a groomer's trailer outside my neighbour's. It was the mobile dog wash kind, obviously a franchise, but I went outside to check it out anyway. My neighbour had used this groomer before for her Golden Retriever and was very happy, and I couldn't watch the actual washing but was happy with the way he handled the Golden so I asked the groomer if he would clip my dog's nails. He asked a couple of questions and agreed easily.

It didn't work. Gatsby was afraid from the get-go. We sat together on the neighbour's front lawn, we tried with me using the clippers, we tried in my yard, we coaxed, bribed, and distracted with plenty of treats. We ended with me restraining Gatsby, groomer failing to muzzle her and Gatsby scratching him and drawing blood.

I felt terrible. I felt really guilty, and really stupid. Why? Because since day one I had been gradually and systematically exposing Gatsby to things she was afraid of. Our first walk she sniffed every single tree, bush and shrub along the way. I let her take her time. From the second or third walk onwards she actually walked. I learned to stop by the side of the road and wait while strangers approached, particularly if they were men or had dogs or children. Soon she waited calmly as they passed or even walked right past them without stopping rather than shy away. At the shops I asked strangers to give her treats. When my friend came to visit I asked her to wait in the hall for a while and toss Gatsby treats through the gate. 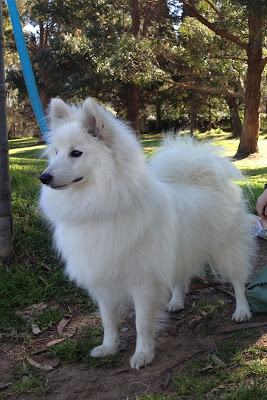 I felt this created more confident behaviour rather than the hit-and-miss approach that came of her people frequently thrusting her into many situations she wasn't comfortable with. This gradual approach worked well for both her and me, so I was still doing all of those things outside the house or when someone came to visit. I felt more in control of the situation and less likely to be pulled off the path or have her posturing at toddlers. She was doing very well, but we still had a lot of steps to go.

So I have no explanation for why I suddenly expected her to be okay with a) a stranger, b) who was male, c) who probably smelled like dogs and d) who came at her with clippers. Everything I've ever read told me otherwise, and it went against everything I believed in and the way I'd been working with her.

After the incident I was afraid Gatsby would regress a hundred steps and all my careful work would have been undone. I was afraid she would be more afraid than before of all of the aforementioned things, or even develop new fears. I was afraid she might be wary of me, even.

None of those things happened. She was still fine with strangers walking by as we calmly waited for them to pass. We found her lying at my visiting brother's feet under the table that evening. She absolutely, definitely loved and trusted me as much as before.

The incident still triggered my depression and I spent the next day in bed. One thing that gave me some peace was when I told my mother about the incident a day later. She told me that this had happened, more than once, when I was a child. I was a fearful child with separation anxiety, and she tried to expose me to more things, like playdates and dance classes. Sometimes it went well, and sometimes it didn't. After the latter, she always felt terrible, and wondered if she'd done the right thing. But I bounced back, just like Gatsby did.

Has this ever happened to you?
Posted by Melon at 02:14