An Outing: In Which Ava Meets A Baby But She Wasn't The Only One Learning

Last Wednesday, when Ava was 10 weeks old, I took her down to the tiny park area at the edge of the nearby main road. It being near the end of the workday, there was lots of traffic going by but no one at the park. Nonetheless, Ava was starting to hang her mouth open so I sat down with her at the benches for a breather. 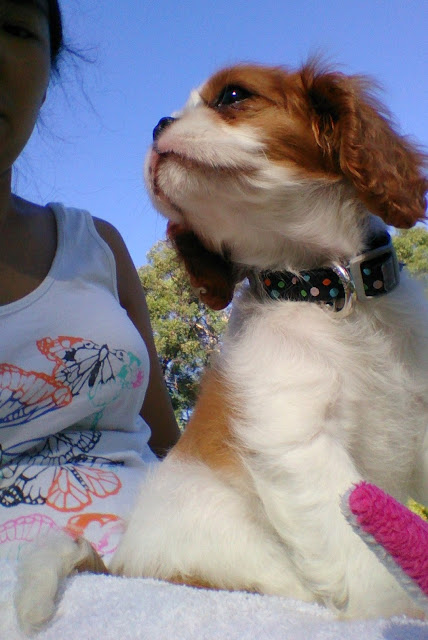 She was happy enough to stay on my lap, eat treats and nibble on her toy, so I was disappointed that there was no one going through the park as we sat there. It was a rather hot day so I was giving her some water out of the cap of my bottle when I looked up to see an older man had pushed a baby stroller right up to me. The park was empty so it was clear he had come right up to see the puppy. Or -- more accurately -- to show the child the puppy. The child was probably about a year old, able to toddle around but unsteady on her feet. He pointed at the dog and spoke to the child, and while I couldn't understand his language, he was obviously explaining 'dog, dog'.

It quickly became clear that we didn't have a common language (even the adult humans!), and yet by his interactions with the child and mine with Ava, we communicated that they would like to, and were welcome to, give Ava a pat.

The older gentleman went first, and like most who have met Ava recently, gently offered his fist for her to sniff. I was, as I have been each time, pleasantly surprised. (That's not how I've been told the general public usually greets dogs!) Encouraged, the child also reached over and after a few false starts also made contact with Ava. They were both incredibly gentle so the man and I spent a little time encouraging them to interact. 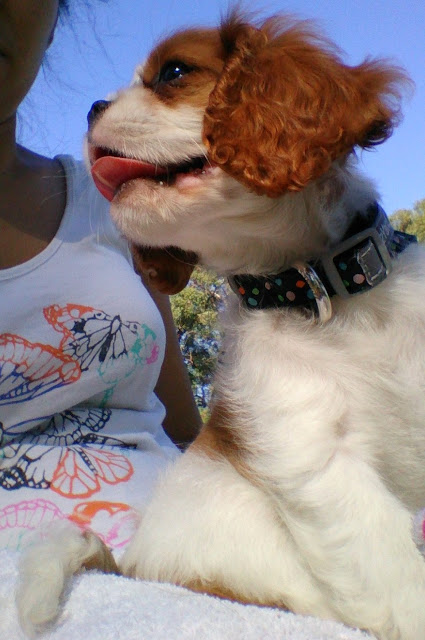 I handed the gentleman a piece of kibble and motioned for him to give it to Ava. He did and she took it easily. Then, the child, who had been clutching a rusk, offered her biscuit to Ava too. She couldn't reach far enough for Ava to eat it and while Ava leaned forward in interest she didn't try to take it. The man and I laughed in delight. "Good girl," we both said, he to child and I to canine.

When the child lost interest and they withdrew, I expected them to leave and I would continue to sit with Ava in the park. But the man spread a towel on the ground a metre or two away and attempted to sit the child on it, pointing out birds and passersby to her. 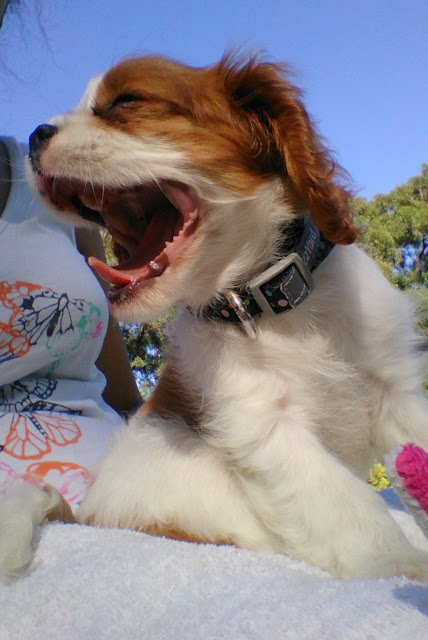 We all spent some time watching the world go by before gathering our respective protégé and left. I don't have photos of the man or child, but if you picture the same as the photos on this post, just one teacher a little older and one student a little less furry, you'll be able to picture it exactly.
Posted by Melon at 12:32