Book Review: Before and After You Get Your Puppy

Have you been wondering how someone who has never had a dog has been raising a puppy? Well, the same way as any first-time dog owner does - read, read, read!

Blogs have given me a real insight into living with dogs and plenty of tips. But I'm going to start by telling you about some of the books I've read to skill up on puppies. In case you were wondering, I don't get books recommended or sent to me for review or anything. I just utilise a resource I really really love - the public library system. So that's where these books come from, mainly. I had heard from blogs that Dr Ian Dunbar is an excellent behaviourist, and I know he has an enormous body of work, so I checked out his books Before You Get Your Puppy and After You Get Your Puppy. I had actually picked up After... first at a used book store when I was looking for books to gift my neighbours who'd gotten a new puppy (yes, I do mean Penne) but after a flick-through very decidedly did not give it to them. 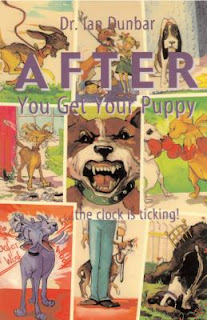 Why? The same reason I think these two books might be rather off-putting to potential/new puppy owners. Their approach is very alarmist.

Let's start with the cover illustrations. Before... looks innocent enough, with the cute drawings of adult dogs reading about puppies, but After...'s cover is plastered with drawings depicting universally annoying dog behaviours - continuous barking, shredding up the house and two dogs with boxing gloves on (no prizes for guessing that one). In fact, look between the vivid drawings and you'll see there's actually a subtitle: After You Get Your Puppy... the clock is ticking!

I am obviously here to learn about the best, most thorough way to raise a puppy. And yet I found the language even more alarmist than the cover illustrations.

Before... states in the first paragraph of its first chapter that

"... some puppies are well on their way to ruin by the time they are just eight weeks old. It is especially easy to make horrendous mistakes when selecting a pup and during his first few days..." (p15, Chapter One: The Developmental Deadlines).


Okay, so an abusive first two months of life could leave its mark on a puppy. But Dunbar is talking about mistakes here. I find it had to believe that an innocent mistake from a well-meaning dog owner in the first few days home will "ruin" the puppy. The basic premise of After... seems to be 'after you get your puppy, you are already late to the game. Quick, do all these things, or you've messed up, big time.' And I find this, frankly, rather off-putting.

Once you get past the alarmist language, though, I found Dunbar provides some rather creative and practical ideas to achieve some of the goals. Puppy Parties are actually not such a bad idea, if you need an excuse for a gathering. The suggestions of catching up on social obligations with family and friends or simply inviting men over for sports night or women for ice cream and conversation actually sound doable and appealing to me. Sadly I haven't yet had a puppy of my own, but if I did -- I think I might actually do that.


"Your pup needs to socialise with at least a hundred different people before it is three months old." (pg 29, Chapter Four: Socialisation with People).

Now, putting the question of necessity aside, this struck me - like most, I imagine - to be impossible the minute I read it. Dunbar suggests having groups of six home almost every night of the week. Now, even the most social butterfly would struggle with that, I expect.

I also didn't know what he meant 'meet' or 'socialise with'. Does she have to just see a hundred people on the street, or do they have to all successfully ask her to follow basic commands, as he suggested is the entertainment at puppy parties? Most puppies get their second vacc at 12 weeks - exactly three months - so we can't put puppy on the ground outside yet, remember, Dr Dunbar?

But just for the heck of it, I kept a simple tally of how many people Ava met while with me in the first three months. I counted 'meeting' as having touched her. I only saw her on weekdays, I couldn't invite people over and not having a car, I could only take her as far as I could carry her on foot.


Most of the meetings were incidental because I carried her with me to buy coffee or sit outside the shops. And yet the day she turned three months old, I had counted 28 people, including men, children and a toddler. She had also met three dogs, and seen the main road, trolleys, strollers, trucks and buses. Add that to the 40 or 50 people she must have met with her owners (they attended a couple of large family gatherings during that time), and Dunbar's magic number doesn't sound quite so elusive after all.

I am trying to amass a collection of dog books, so I would hang onto these books for reference as they have a few good ideas in them, but just from using the local library I am finding that there are many, many good basic puppy books out there. Most new puppy owners I know have bought a couple of puppy books they are going to use, and due to the alarmist language I don't think I'd recommend these two for that, even though their information is very sound. I want people to feel empowered -- not intimidated -- to raise their dogs well.

Have you read these two, or other Dr Ian Dunbar books? What do you think?
Posted by Melon at 13:28