Ava Stories: The Fearless Girl and the Big Scary Object

Friends, Ava's going home... I can hardly believe it.

It's been lovely, and fun, and incredibly exhausting. I've learnt a lot and been stressed out of sheer tiredness. So I'm ambivalent about her going home. (Bear in mind I'm probably back for house visits as early as tomorrow!) I know I'll miss her as soon as she's gone though. So I think it's time to share some Ava stories.

The first thing you need to know about this little dog is that she's fearless. I don't know how much of it is puppy and how much is just her, but so far she has not shown a trace of fear when faced with strangers, dogs, trucks, thunder, yelling... in fact, new things all pique her curiosity and I'm usually making sure she stays out of trouble!

Our first ever dog park trip went excellently. We were just going to sniff nearby but even walking by the perimeter fence Ava behaved just like we were on any other walk through the neighbourhood, perfectly happy and curious. So we went in and interacted with a number of calm dogs, the biggest of which was a Viszla, and Ava sniffed, and greeted, and followed, and chased... and was her usual self, surrounded by things she's never encountered in such intensity.


But this story isn't about that.

This story is about the Big Scary Object.

One day Ava was napping on the backyard porch. The door to the yard was closed so I decided to take the opportunity to clean the carpet in the next room after an incident I won't detail involving a pen door which may or may not have been latched and a silly human who may or may not have left it unlatched. I hauled the vacuum cleaner out of the cupboard, which had not been taken out since Ava had arrived.

You think you know where this is going -- but do you?

I walked past carrying it when the barking began. Ava got up, ran to the glass door and bashed her paws on the glass, barking. Barking from this 16 week old Cavalier has been a rare occurrence. (Remember, I hadn't gotten it out since she had arrived. This doesn't just mean I won't win housekeeper of the year -- it also means Ava should have no idea what it does.) Surprised, I put down the vaccuum and opened the door. This is what happened. 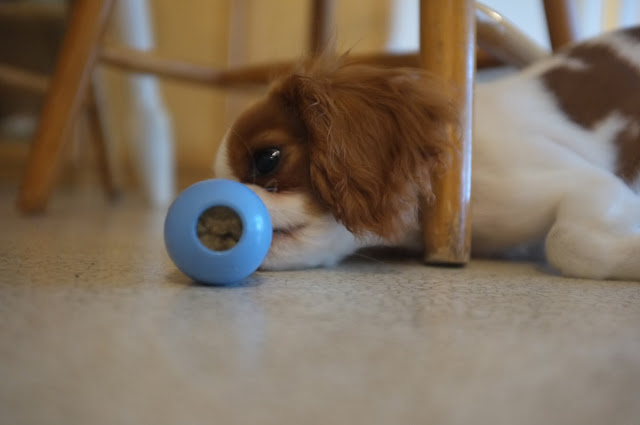 An Interlude: In Which Melon Visits an Old Friend

Friends, I have something nice to share with you.

Remember Katie? She is the Lab I walked a few years ago when her human went interstate. She was 10 years old then, but had no idea of her age and had insatiable enthusiasm for people (read: jumping up), walks and food. Because of this I learnt to clicker train, and discovered that I enjoyed working with dogs.

Her human has been jetsetting around and developing a great career, so I haven't seen Katie since then... but the other day I saw her again!

Her human was back home for a visit so I stopped by the house to see Miss Katie. She is 13 years old now, still has that lovely yellow coat, soft ears and big smile.

Okay. To be perfectly honest -- I wouldn't have known it was the same dog. I knew she's old now, but still expected her to jump up at me -- that was her defining characteristic, in my mind. This quiet, sedate girl just wanted to be with us, and certainly didn't show a lot of enthusiasm.

I'm sure it's natural and easier to get your head around when you've seen it happen, but I haven't seen her for years. I'm not sure what her human thinks, since she's been away most of the time too. (Katie's been in the care of family.)

Clearly both her human and I are learning about ageing in dogs -- a good lesson -- but regardless, I was very glad to see her again!
Posted by Melon at 10:42 No comments:

Ava's Adventures: In Which Melon Tells Us What She's Learnt From Puppy

I learn things every time we have a dog stay with us at home.

Ava has taught me:

This book was another library find of mine. It's one of those large, non-fiction books you find on its own little stand because it looks new and colourful.

I came for a few 'recommended' books such as the Dunbar guides and having spotted it on my way out, grabbed it also. I was attracted by the modern cover design and easy-to-read typesetting, but it turned out to have a really practical, sensible approach to having a dog in the city.

In fact, I feel it provides a practical, sensible approach to having a dog in general. This Hamlyn (UK) book may not have had us 'down under' in mind, but Australia is one of the world's most urbanised countries. We also have one of the world's highest rates of pet ownership. So it's not surprising that I feel this book is practically a must-read for a new dog owner.

The City Dog: The Essential Guide For the Urban Owner opens with an introduction to the idea of dogs in the city:


While it may be tempting to think of most dogs being at home in green fields and woodland, they can adapt well to life in the city and can flourish there, with a little understanding, training and care. (Introduction, p.6)

And I think this book provides us with just that -- a little understanding, training and care -- so that we can, in turn, provide our dogs with the same.

It presents a thorough understanding of the issues involved in having a city dog, from sheer size considerations for a dog navigating city streets to the necessity of 'leave it' in that environment.
Each double-page spread has eye-catching (and adorable!) photos alongside descriptions which provide an understanding of the relevant concepts without descending into jargon.

And the training exercises? Recall, Sit, Down, Leave it -- as well as attention, socialisation (with checklists!) and café manners -- are what I'd consider essential for any pet dog anyway, so I love that they are all there, with step-by-step photos.

And I think reminding owners about balancing their needs with that of their dogs -- such as bringing the dog along to the outdoor mall for a shopping spree but taking care pup doesn't leave hairs on the clothing -- shows that they really have covered the topic 'with care' and consideration.

But really -- this is all just my very long way of saying I really enjoyed this book. I was impressed at how it could present such sound, comprehensive and relevant information in such a simple manner, with more than half the book being beautiful photographs and so few words! (... unlike me!)
Posted by Melon at 22:34 2 comments: