Ava Stories: A Hobby For Ava

The day I met Ava was the day she turned 8 weeks old.

I've known very few puppies that young, so I couldn't say if it's the norm, but I sure was impressed that she could carry a standard-sized tennis ball around in her mouth. (I'm still not sure how.)


It wasn't the only time I saw her carry things; she liked to find leaves or sticks and would carry them to the right spot before lying down to chew them. If something interesting happened while she was chewing, such as the human leaving, Ava would get up and follow with the object in her mouth.

So I decided she's a natural retriever. At about 10 weeks she had gotten the hang of Sit and Come, so it was time for Fetch! 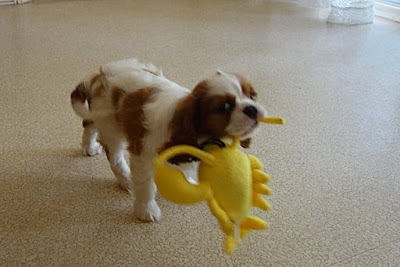 She easily had the 'chase moving thing' * and 'pick up thing' down pat, so with a bit of experimentation and consulting YouTube I managed to teach 'carry the object and run'. Giving up the object is always the tricky part, but we got better at that too, as I'd been working on swapping objects for treats since almost since day 1.

Ava's people and I all loved playing fetch with her -- but it didn't last. Her interest in fetch has petered out, but her delight in sniffing things has not.

Which leads us to my house.

One night I took puppy out for 'last call' and she was doing the particular brand of zoomies which only seem to happen when it's getting late, I'm tired and the mosquitoes are particularly thirsty.

I leaned against the wall and sighed. Suddenly Ava stopped mid-zoom and ran into some dense bush. She emerged back out immediately, and I peered into the darkness - what was she carrying? It with her plush raccoon, a flat fabric toy with no less than 5 squeakers and a particular appeal to Ava. I had no idea it had even left the house!

I cracked up. In a few seconds, what had been yet-another frustrating evening with a young puppy was suddenly hilarious.

Fast forward a week or so...

I was sitting in the yard with a book and Ava had followed me out, only to wander aimlessly as the human wasn't giving her any attention.

It was a good time for her pickle, I thought, looking around.

Her pickle is a spiky green rubber toy which rolls and bounces in unpredictable directions. It's excellent for occupying puppy when you don't want to throw the toy for her. But it was nowhere to be seen. I checked the corners of the house, inside the crate and the lawn. I shrugged and decided I'd make some "LOST: pickle" posters after I read my book.

About 5 minutes later I looked up, frowning. It was eerily quiet. All dog owners know the immediate feeling of trepidation when you hear silence. I looked around the yard. Where was Ava? Nowhere to be seen.

Out she burst from the nearest bush, pickle in mouth.

Perhaps nosework might be more a more suitable hobby for Ava.


* Next time I would start with "take it" a la the Volhard Motivational Retrieve, as that's definitely a missing step. Anyone know if I can re-train the steps from the beginning if she already knows some of them?