A Dog: In The Middle Of Many Travel Adventures

So I know I said since I'm on holiday I wouldn't be posting here (but instead at the travel blog) but
I just feel kinda bad for neglecting my dog-blog-friends!

So here's a couple of quick photos of Milo, my aunt's mini poodle. 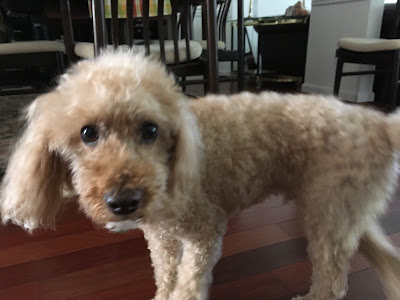 He's quite an anxious boy and paces a lot, whether there are visitors or not, but after a long time of being patient, he eventually approached and I was able to touch him without his shying away (my mother achieved that first - humph).

I stayed with these relatives four years ago and poor Milo was more anxious then, he paced the whole time we visited and I never touched him. But I knew less about dogs then... 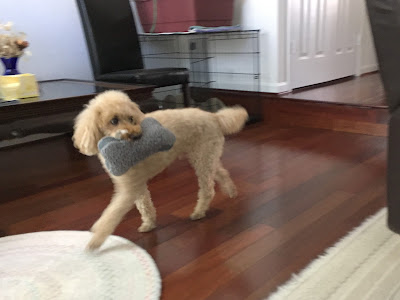 This time I managed to engage with him through a game of tug, and I was so happy to see he really does play! I had cast a skeptical eye on his toys when I arrived as I have friends with dogs who have toys... just for doggy decor as they couldn't care less about play! 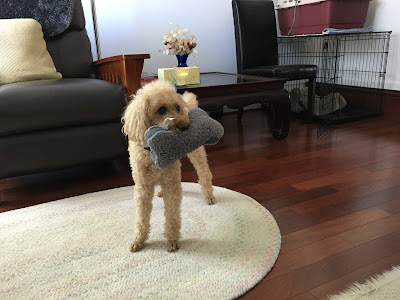 My uncle said 'watch out for his teeth, he can be careless' - but I couldn't have cared less, as I was so happy to see him doing something other than pacing!

Plus, this game of tug and a brief leash walk is the only dog-interaction I've had for a couple of weeks, so I'm grateful to him for giving me my dog-fix!
Posted by Melon at 03:45

Email ThisBlogThis!Share to TwitterShare to FacebookShare to Pinterest
Labels: dog