A Morning: Featuring Sunshine, A Success, and Pink Combat Boots

It seems to be tradition that on the last morning of a dog's stay with me, we are out early enjoying the morning sunshine (and tolerating the cold!). I use my camera to get a few decent shots and to keep me from getting antsy, as I am wont to do when things are quiet.

I had a lovely game of fetch with Scruffy this morning! It feels really satisfying to have found a way to play safely -- even if just for this time.

See, 7-year-old Charlie is nervous of his boisterous little brother. To be fair, Scruffy is clearly the dominant one and will sniff Charlie periodically to remind him who owns the toys, and even lunge at/hump his brother on occasion. But it has created a little fluffy fun police. Any time there is any kind of arousal level from a dog in the vicinity, be it Scruffy bouncily fetching a ball for a human, or Scruffy and Ava checking each other out -- Charlie reacts, barking and growling at the 'threat'.

I understand it, since his brother is known to redirect arousal onto him -- but it's still frustrating that I can't help 4-year-old wire fox terrier Scruffy work off his energy with tug or fetch because Charlie will react. Note that Charlie reacts when none of these high arousal levels are actually directed at him... if Scruffy happens to find a tennis ball and begins to bat it around with his paws, my eyes will be glued to Charlie!


Now, the shoes. I mentioned that Scruffy pulls off shoes -- this seems to be an excitement behaviour. If he is trying to hump or play fetch with a human, he may suddenly and very deliberately grab a shoe in his teeth and pull it with such force he pulls it off. (You can imagine my shock the first time he did it -- there I was, sitting on a chair, when out of the blue Scruffy came up and started humping my leg. I pried him off me and he grabbed my shoe and pulled with the unyielding grip and force of a terrier -- which instantly set off quiet Charlie, in the doorway of the house, barking and growling! Boy, was I wondering what had hit me...)

But I've learned a thing or two since then.

So this morning I put on my trusty combat boots and grabbed the toy. I then recruited my dad to help out. His job? Call Charlie over to him and sit with him while I threw the toy for Scruffy. And you know what? Scruffy fetched, Gave and Sat for me to throw again, and when he grabbed my boot in his teeth I planted my feet and yelled "NO!"

My boot didn't budge, of course, and Scruffy actually let go, so I firmly commanded him to Sit and turned my back on him for ten seconds. When he was calmer, game resumed. 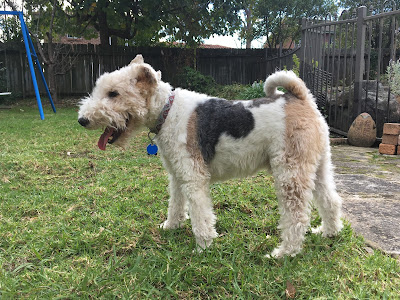 This is basically the same method I used to teach puppy Ava bite inhibition  -- yelp and turn my back to stop the game when she used teeth. Only the Scruffy method requires you to a) steel yourself, figuratively and literally (okay, my boots are actually rubber-capped, but did I mention they're pastel pink? So nyeh!) and b) keep Charlie well enough away/occupied so as not to interrupt the training with his panic.

But this morning I managed it, so I am super happy. 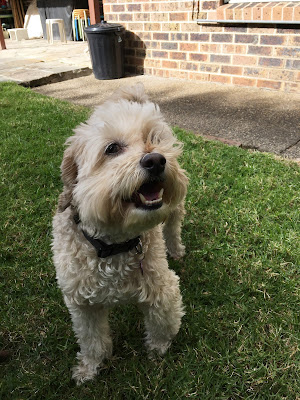