An Epiphany: Regarding the Magic of the Microwave

My house visits to Ava are when her humans are at work. We spend time both indoors and outdoors together, but she spends her alone time indoors. My challenge when leaving is to get her inside so I can shut the door without her following me. 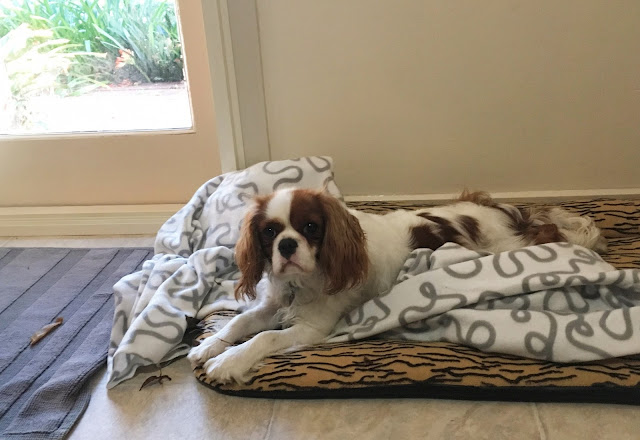 I prefer not to call her to me just to step out again. (I'm sure she would wait inside the doorway while I shut the door if I asked her to, but I don't want to risk rebellion if she ever decides she doesn't like her alone time. It's the age old rule, don't call your dog to you for something bad.)

I don't make a fuss of her either -- in fact I don't even say goodbye. Instead, when it's time to leave I just walk out, shut the door and leave. All without saying a word. I'm sure it would look a bit strange if anyone were to see me, but I have been doing this since Ava was 2 months old, and she's never shown any sign of separation anxiety. So I can deal with feeling like I'm heartless (not to mention rude) for my abrupt disappearances.

It's not usually difficult, but I do employ a few different strategies to ensure I can efficiently shut dog in with human out. Thrown kibble, a tasty chewie to occupy pup or sometimes leaving through a different door, just to change it up. (Lately I've been hearing more about flexibility over routine to create a stable dog.)

Recently, though, I feel like she's onto me, just a little. Staying on the outside of the door when I want to shut her in. Today when I hovered by the door she actually disappeared around the side of the house to the other side of the yard, probably to wait by the outer gate or maybe just part of her important doggy business, I don't know. But don't worry - I had a plan. I went straight to the kitchen and opened and shut the microwave door.

I heard the rapid pitter-patter of paws before I saw her running in. As soon as she was in, I silently stepped out and shut the glass door behind me. Ava disappeared from view for a moment before returning to watch me leave. I think she really did check the microwave!

After all, if there's one thing I've learnt as a 'dog owner', it's to use whatever works. So here's a thankyou to the microwave and puppy logic.