Mischief Monday: In Which Melon Is Tricked By A Dog, Again

The great thing about having an instructor who works many jobs and has working dogs in and out of his property all the time is that sometimes, they come to class.

"Your job," he said as we arrived for our second practical lesson, "is to spoil this puppy. Pat her, feed her treats -- nothing you do with this dog is wrong, today." 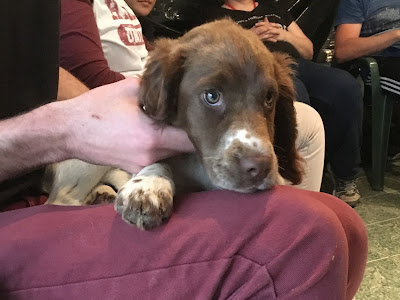 'This puppy' was a beautiful little English springer spaniel, 11 weeks old. She had a brown head, white speckled body, and seemed to be all legs. When I first arrived, she was obviously timid, so I let her be. I knew we'd all be swarming into the grounds soon, and that seemed quite enough for her to get used to.

By the end of the day, however, she'd been fed, cuddled and rubbed, as instructed, as well as worn collars a dozen times (both correctly and incorrectly -- we were learning to fit collars!), and was clearly feeling much happier about people. 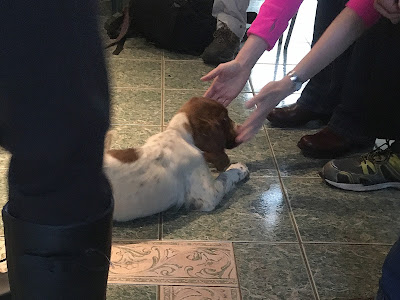 Now, I didn't set out to teach her anything, honest. (Those who know my teacherly tendencies, stop laughing. I mean it.) But at some point in the day I was handed a tennis ball, and Ava's taught me what puppies like. I'm starting to think, though, that spaniels just can't resist moving things.


When I rolled the ball around and around in front of her, and then gently towards her, she followed it with her eyes, and then suddenly pounced in the direction it rolled. She was adorably clumsy, but soon learned to pick it up in her mouth and return it to me. Whenever she did, I gave her a treat, showered her with praise, and threw the ball for her again. 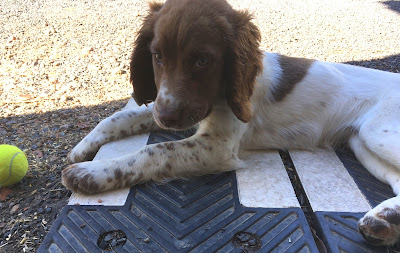 My instructor had spotted me playing with the puppy throughout the day. As class wrapped up, he said, "Okay, class dismissed... oh, before we go, let's see what Melon's taught my dog."


The class watched as he gently tossed the tennis ball to the 11 week old puppy, who was lying on the floor in the middle of our class. She clumsily followed it, picked it up in her mouth... and ran out the door with it.
Posted by Melon at 22:29