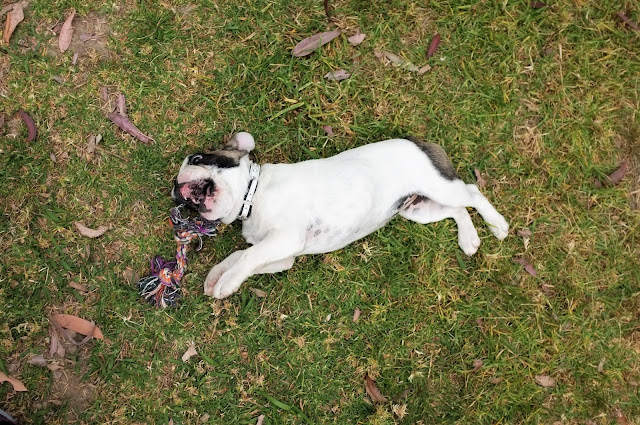 15 week old Coco is learning to go to her crate when asked. 🐕 (Please excuse my super clumsy treat delivery!) #dogtraining #puppy #puppytraining #frenchbulldog
A post shared by Melon (@melondious) on Sep 26, 2017 at 5:52am PDT

Do you guys remember the rope toy for mice? Okay, it's not really for mice. But it's so small I didn't know what it was for... until Coco showed me!

A Visitor: Of the Baby Puppy Variety


This is Coco. She's a 15 week old French bulldog staying with me this week.

She's teeny tiny -- or at least she seems that way to me, despite spending most of my days with Cavaliers. I guess it's easy to forget how little and babyish puppies are!


It's early days, but I'm pretty sure we're going to get along. She's confident, which I love, and curious without being a pest. And we've had a couple of good games of tug-of-war. Stay tuned for video!

She wasn't a fan of being put in the laundry for a nap (puppy alone training: starting above threshold -- oops) but has settled into having her pen in our main living area. From there she is now happy for us to leave and return. She had a good sleep in her crate last night, too.

Coco likes to explore the yard, and frequently engages in what I'm fairly sure is scent marking. Has anyone else seen scent marking from such a young dog?

Otherwise, we are having fun. It can be tiring to keep up with puppy routines, but I'm looking forward to showing Coco the big wide world, which is always my favourite thing to do with puppies.

Wordless Wednesday: It's A Dog's Life 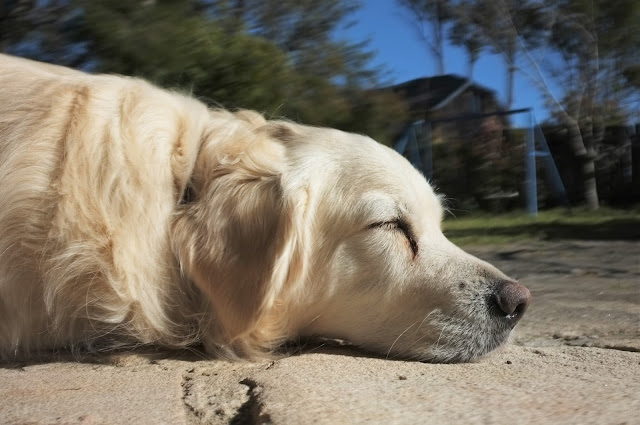 In Which Being A Dog-less Dog Lover Has Its Perks

I'll be honest. Being a dog-less dog lover -- much less dog trainer -- sucks.

But sometimes, it provides unique opportunities.

Last night, I went to obedience club, even though I wasn't rostered to teach. The other instructors often bring their own dogs to train when they aren't teaching. But, of course, I don't have a dog of my own. No matter. I could just watch a class -- there's always something to learn about teaching [humans], and training [dogs], by watching others.

But then my colleague Ryan, who was teaching last night, offered to lend me his dog, Barney, so I could participate in a class.

I felt a bit of a thrill as I took Barney and joined the line of students waiting for our instructor. (Not Ryan -- we run many different classes.) Now, I have taken Miss Ava in class before. But this felt different -- probably because I've never worked with Barney before! So I imagine the feeling was one part 'I hope I don't embarrass myself' and two parts 'hey, this is cool'.


It turned out to be a bunch of fun! Barney is a wonderful dog. Very, very laid-back for a young labrador, and he was very responsive to me, despite the fact that, well, he doesn't know me! Even more impressive was the fact that Ryan was about 10m away, walking around and calling instructions to his class. I've seen dogs in class ignore the 50-60 other strange dogs and their handlers working around them, but lose all focus because their other human, fur-sibling or doggy friend are elsewhere on the field.

But Barney, absolutely cool dog that he is, was content just to glance over at Ryan when we took breaks. Loyal, but composed.


It was a great night. I'm grateful to Ryan for lending him to me, to the instructors at club who trust us with crazy shenanigans, and to my classmate who always gives me great training (and teaching) advice every time we see each other.

And of course this dude, who made my night! I'm still grinning.


Being dog-less in the dog industry is a weird place to be. But sometimes, cool things happen.
Posted by Melon at 18:13 No comments:

A Feature: In Which We Discover The Truth of Being a Café Dog

Keisha here to tell you about the life of a café dog.

Sometimes the scratches need some work...

Sometimes people want to give you hugs.

It's a hard life, but someone's gotta do it.