In Which We Examine Smudge's Favourite Thing

In the photo of Smudge in my last post, she had a denim bone. This is a toy I hand-sewed from old jeans (stuffed with polyfill and a couple of squeakers) and is Smudge's favourite thing at Chez Melon. 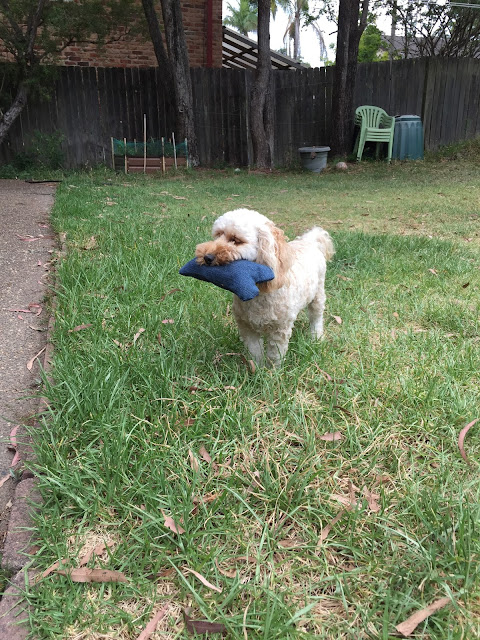 She runs around squeaking it, tossing it up in the air and chasing it, barking at it and growling while she shakes it.

She takes it with her on patrol...


She carries it when hanging out...

She picks it up when anyone enters the room and gives you this look.


She can run, pee and bark with the bone in her mouth, although I don't have photographic evidence of this.

She also sometimes sits in bed with it.

Hello dear readers. I hope you're all enjoying the lead-up to Christmas, and aren't too busy with preparations!


And now to my latest furry companion...


Smudge is a young spoodle (cocker spaniel x toy poodle) who will be living with me over the summer while her humans are away.

She's only been here a few days but I have discovered that she is quite the character!

For one, she's a chatterbox. She likes to narrate her day with a variety of whines, barks and growls. She can be extremely vocal about us leaving the room, although she has since realised that we aren't going to disappear if we go into the hallway. She barks at her toys before pouncing on them. She barks excitedly about food and walks. Sometimes she whines loudly (for no discernable reason). And her growls while wrestling her toys are really quite formidable!

I guess you could say she has a flair for the dramatic.

She's also very clever. While filming her enthusiasm for toys, I caught a moment where her toy got stuck in the chair and she effortlessly solved the problem:


The other interesting thing about Smudge is that every member of the family interacts with her in some way. Now, I am the dogsitter. And my dad loves the dogs and always slips them treats (to my constant exasperation), and lets them follow him around the garden and drink from his watering can.

My mum, however, rarely interacts directly with the dogs except to tell me how cute they look doing something. But as she loves to see Smudge play so joyfully, mum's played fetch with her a few times outside. Now every single time mum enters the room Smudge picks up a toy and runs to the garden door. And every single time mum feels guilty... and most times she goes out with her "just for five minutes".

It's going to be an interesting summer!
Posted by Melon at 21:00 No comments: